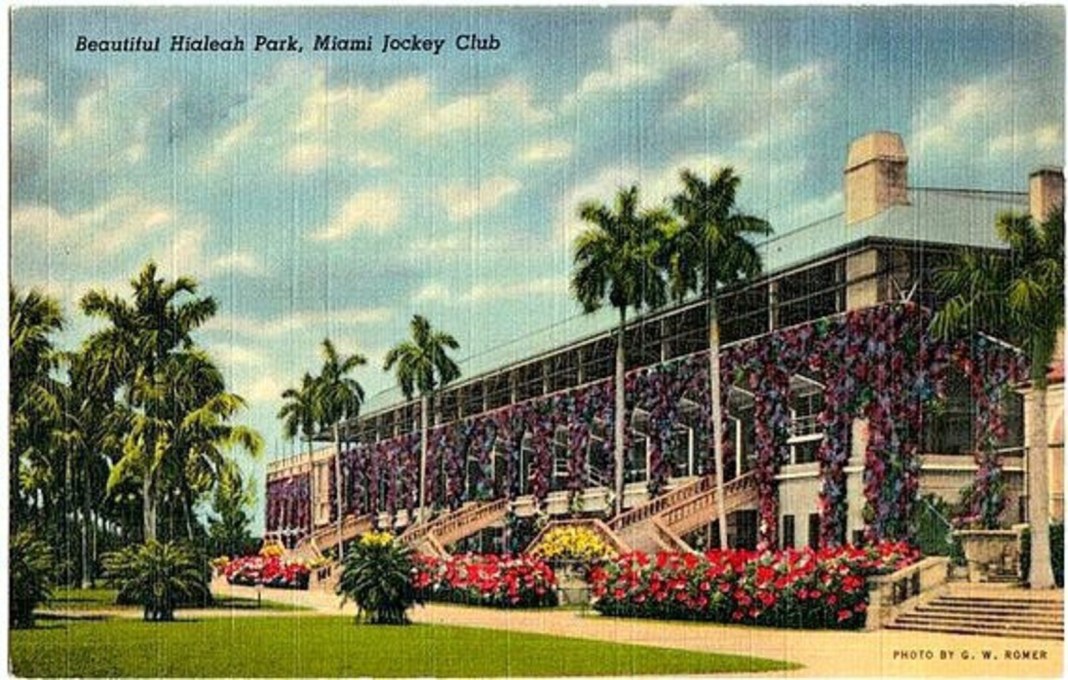 Often called the most beautiful horse race track in the world, Miami’s Hialeah Park has had a long and storied history. Famous for its setting, its prestigious races, the many famous horses that won there, and of course the flock of bright pink flamingos that nested in its infield, Hialeah Park was, and still is a legend. Opening for thoroughbred horse racing in 1925, Hialeah Park by now is almost one hundred years old. A faded grand dame that no longer holds thoroughbred racing, but stays alive as much as it can through its newer casino, Hialeah’s track, grandstands, clubhouse, and paddock areas all still exist and could easily be brought back to their glory days. Hialeah really comes alive, however, in many vintage newsreels recorded there, some of which are still available online.

The 1962 Bahamas Stakes, held at Hialeah, was the first chance for Kentucky Derby hopefuls to test their chops, was won by Sir Gaylord running, as the announcer says, “like a real Kentucky winner today.” It was Sir Gaylord in the lead by almost two lengths as they crossed the finish line.

A busy day at Hialeah as the racing season was in full swing, there was no more glamorous daytime destination than the race track. Patrons “followed the flamingo” to get to their destination, a day at the races. After a few turns around the paddock, where you got a look at the horse or horses as you decided what to wager on which, the thoroughbreds along with jockeys, trainers, and even some owners went on a short but grand parade to the starting line. There’s the starting pistol, and they’re off! But no matter who wins, throngs of eager racing fans will have seen them do it. The parking lot is practically a museum of license plates from all corners of the country.

In the ’80s, Hialeah Park was already starting its slow decline, with betting revenue down and 1981 being “anything but a banner year” for the track’s finances. But things, at least as far as the Flamingos were concerned, were finally looking up for those pink fowl. After going nine years without mating or producing a single offspring, Hialeah Park’s flamingos were finally getting down to business and the flock began growing again. Hialeah employees had started spotting eggs, at least ten of them as of this news piece, on the island the flamingos occupy at the center of the track. Nobody knew why the flamingos had held off for so long, or why exactly the dry spell finally ended, but employees had tried everything and were grateful for the respite.

From your average betting Joe Shmoe to glamazons in chic midcentury hats with wings on them, everyone was out in full force for Hialeah’s opening day in 1950.

In 1935, the racing horse Black Helen was a sensation, winning races across the country, but beginning the 1935 racing season with a couple of victories at Hialeah Park, including for the prestigious Florida Stakes. Hialeah has seen many great winners through its gates over the years, including of course the legendary horse Citation in 1948, which was only one of the horses that passed through Hialeah to go on to win the Triple Crown. 1935 was also the year that Seabiscuit made its debut at Hialeah.

Here’s a 16-minute profile of the thoroughbred racing world in Hialeah, produced in the 1960s.

1932 was the year Hialeah Park, as we know it today, opened. An earlier incarnation had opened as a dog track in the ’20s, and after a few years was purchased after being purchased and completely rebuilt as the gorgeous structure it became known for, by Philadelphia horseman Joseph Widener. Here you see a look at some of the complicated machinery of the Australian totalisator, which was used for accepting parimutuel betting, and the first to be installed in America.

Hialeah Park was world-famous from the beginning. Here’s a British newsreel from 1939 chronicling the horse Early Delivery’s win at the track.

It was as famous as Santa Anita in California. Here, races at the two are compared in one vintage newsreel.