What Edgewater Could Have Been: Incredible Projects In and Around this Miami Neighborhood that Never Happened 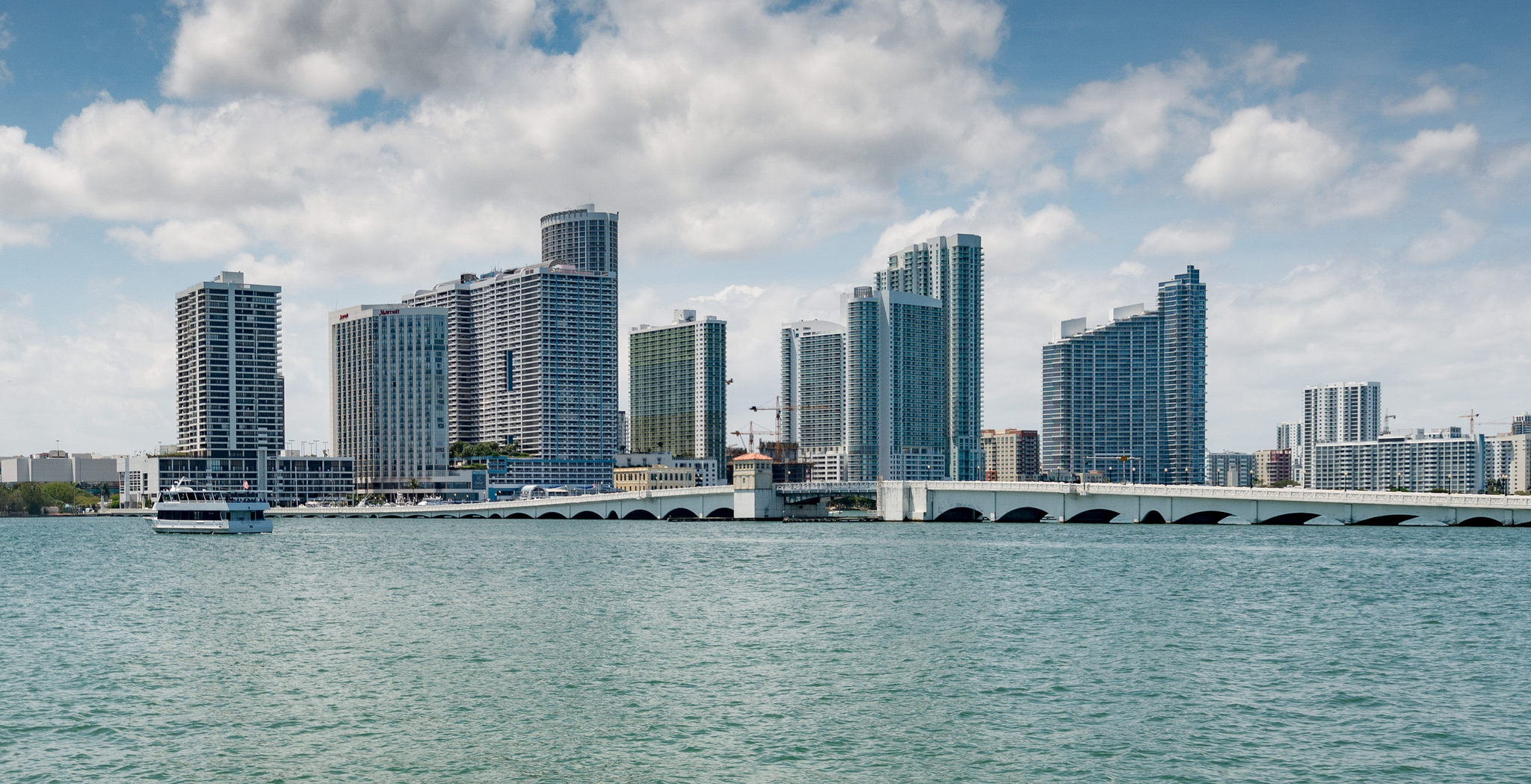 In the past few decades, Miami’s Edgewater neighborhood has undergone a development boom of epic proportions. But for all of the projects that have been built, there are even more that never got off the ground, or were never finished. Here are some of the most interesting projects that could have made Edgewater a very different place.

A Grand Fountain on Biscayne Boulevard

Around the time Biscayne Boulevard was being built by the Shoreland Company, in the style of a grand, palm-lined boulevard and shopping street stretching all the way up to Miami Shores, another developer, the Davenport & Rich Development Company, planned a plaza of four buildings centered on a fountain at 33rd Street and Biscayne Boulevard. Interestingly, the plaza was actually planned in 1924, just before Biscayne Boulevard, when it was just called 3rd Street, but the development of the boulevard was fortuitously aligned to preserve its central axis.

Each building appeared similar to the others at first glance but was architecturally unique, with details that set them apart. The fourth building and the fountain were never built, and the third building was demolished in later years. The two remaining, now known as the Beverly Terrace Historic District, are both apartment buildings. Interestingly, according to a Miami Daily News article of the time, the Beverly Terrace buildings represented the first example of co-op apartments in Florida.

The gracefully curving Paramount Bay condominium tower on Bayshore Drive was originally designed to wrap around an iconic Mediterranean Revival house. Spanning the width of a full city block, Paramount Bay is a residential tower that bends in a quarter circle thrusting out to the bay. The house was famed for appearing in the movie ‘There’s Something About Mary.’ The exterior scenes in the movie, shot on Bayshore Drive, show just how much the neighborhood has changed, from a low-scale enclave of single-family homes to one of towering residential palisades.

During construction of Paramount Bay, a crane fell on the house, significantly damaging it and killing two construction workers. The rest of the house was demolished and a new low-rise building, with a rooftop pool for residents and sky bridge connecting it to the tower, was built in its place. Ironically, at the time of the accident, the ‘Mary’ house was being used as the project’s safety office.

An Island Just Off Shore

In the heady boom days of the 1920s, developers envisioned filling Biscayne Bay with artificial islands, many of which were realized. Even more, however, were planned, including the long Isola di Lolanda, which would have spanned the gap between the Venetian and Julia Tuttle Causeways. Developed by the Shoreland Company and the Venetian Island Company, it would have connected with the Venetian Islands at the northern tip of Di Lido Island. The companies had even begun installing pilings for the island, which would have been followed by a sea wall, and which remain visible to this day. The 1926 hurricane, objections by many to the mutilation of Biscayne Bay, and the bankruptcy of the Shoreland Company as the Miami real estate bubble burst meant that the island was never built. Finally, the onset of the Great Depression sealed its fate.

The Grand Park that was Never Finished

Built for the American Bicentennial, Bicentennial was a 35-acre facility which opened in 1977, missing the nation’s birthday party for which it was planned. Designed by renowned landscape architect Edward Durrell Stone, it was meant to be a “unique retreat from urban pressures” on the edge of Downtown. Only a third of the $4.2 million project was ever completed. The contractor disappeared, work stopped, and the park opened late.

Large earthen mounds and walls shielded the park from Biscayne Boulevard, isolating it from the city. A cafe sat on the water. The grounds were laid out in a naturalistic fashion, with man-made hills serving as overlooks on the bay. Crimes in the early days of the park scared people off and, largely empty, it was soon bastardized further with the insertion of a large, asphalt Grand Prix race way. Incomplete, unloved, and unused, Bicentennial Park was completely demolished and replaced with Museum Park, and the two museums which sit in it today.

The I-395 and Biscayne Boulevard Tunnels

The elevated I-395 highway that slices through Downtown Miami from the I-95 interchange to Biscayne Bay, will soon be replaced by a ‘signature bridge’ that is higher than its predecessor and attempts to make an architectural statement with huge arches. One of the reasons for doing so is an attempt to link the neighborhoods together by creating more open space under the highway. However, an alternative plan discussed for years but ultimately unexecuted would have placed the highway underground, leaving the newly created land above it for private development, park space, or even the creation of a grand boulevard. At one point, burying Biscayne Boulevard in a similar way was even discussed as well.

An Even Grander Fountain in the Bay

When the Icon Bay condominium tower was under construction at the end of an inlet from Biscayne Bay in the heart of Edgewater, marketing materials prominently showed a large fountain in the center of that inlet. The fountain would have been visible from the public park and bay walk built in front of Icon Bay, and from the amenities and condos located within it, and from quite a distance out in the bay due to the multi-story height of its water jets. The fountain, however, was never built. Perhaps the developer, the Related Group, wasn’t able to get permission to build it on public bay bottom, but that’s just speculation.

Towers That Could Have Been

In the last twenty years, dozens of residential towers have shot up in Edgewater, making it a high-density urban neighborhood. However, even more have been planned but never realized in the neighborhood and nearby over the years. There’s the Park Lane Tower, the Chelsea, the Spark, the 1400 Biscayne Office Tower, and On the Bay, a simpler version of the Aria on the Bay, which was recently completed. One of the largest vertical projects to be attempted in the neighborhood was the three-tower Auberge Miami, to be built at 14th Street and Biscayne Boulevard. Designed by Arquitectonica and developed by Related Group, Auberge would have been three towers of residential and hotel space connected by a massive pool and amenity deck that sat atop a podium of parking and commercial space. Auberge was canceled just a few years ago.