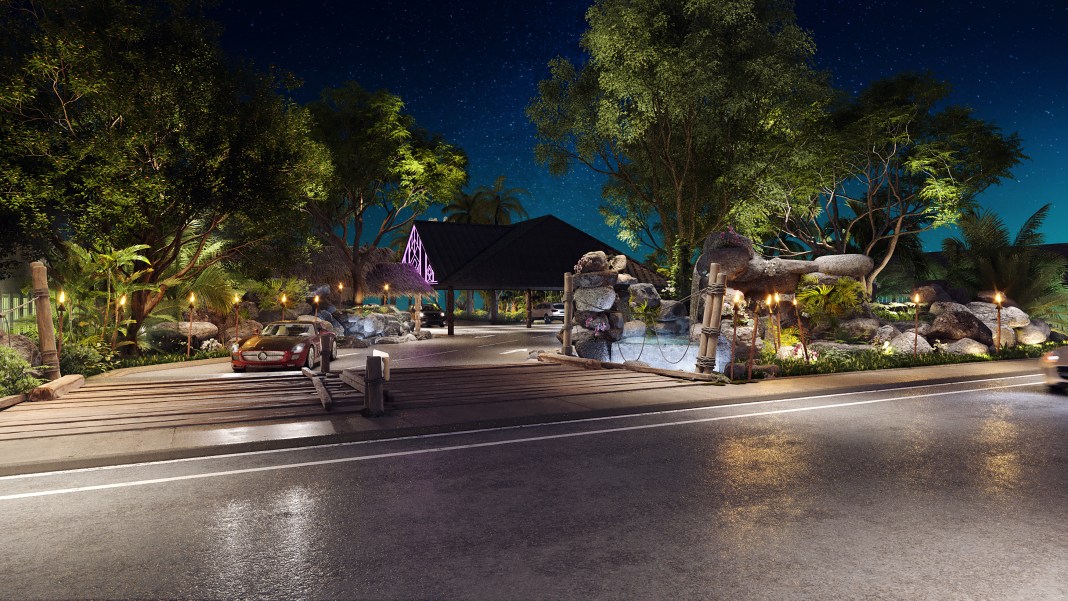 In April the owners of the Mai-Kai, the iconic and now-shuttered polynesian themed restaurant in Broward County, unveiled their grand plans to the City of Oakland Park and neighborhood residents for the property, including an enhanced entrance experience and banquet hall, along with necessary repairs to the roof and air conditioning systems, a new kitchen, and restoration of the main dining rooms. A part of the 65-year-old building’s roof caved in back in October of 2020, leading to the closure of the Mai-Kai and questions as to the venue’s future – a future that is increasingly looking to be in safe hands.

Repair work to the roof is already nearing completion. The revamped entrance experience will preserve the historic wooden bridge that cars take to enter the property, but remove an abandoned building to the north, known as the Bora Bora Building, to add a longer entry drive meant to prevent traffic from backing up onto Federal Highway. Cars will snake around to the rear of the property and around a large traffic circle, with a highly decorative and landscaped central feature, before looping around again to the main entrance.

The Bora Bora Building was originally used as a banquet hall and then a gift shop, before being left abandonded after being damaged in Hurricane Wilma in 2005. Although part of the property’s historic designation, the owners believe that removing this space will be worth the loss. Historic trees, including “two extremely mature banyan trees that have been there for decades as well as a tropical clusia tree,” will be preserved, and outdoor seating will be added to the Molakai Bar. Back entrances to the parking lot, which faces a residential street, will be closed, and very lush landscaping will also allow that side of the property to more sensitively respond to that street’s needs.

The upgrades will not affect the experience which the Mai-Kai is famous for. According to the Atomic Grog, which attended the presentation and has a detailed report on the plans, there are no major plans to change the visitor experience once people enter the Mai-Kai’s front door. “From the nautical-themed Molokai bar to the dining rooms named for South Seas islands, a night at The Mai-Kai will remain a transportive time capsule considered to be the last grand mid-century Polynesian supper club in the world.” In fact, the main interior spaces are being highly preserved down to small details like original furniture, which is currently being restored. The famous Polynesian Islander Revue dinner show will be revived, with costumes and and choreography done by the restaurant’s former owner and matriarch Mireille Thornton.

Due to technological advancement and the increased efficiencies modern commercial kitchens can provide, the kitchen is being shrunk to half of its original size, from 7,000 to 3,500 square feet. This allows for the creation of a new 3,500 square foot event space replacing the Bora Bora Building. This section of the property is being designed by a man with the rather perfect moniker of “Typhoon Tommy” Allsmiller, a former Disney Imagineer and theme park designer who now specializes in creating tiki-themed spaces. He envisions a new A-framed roof being built over the space to enhance its dramatic theming, with an entrance adjacent to the Chinese Ovens, where guests can watch meat being smoked on an open brick grill. This new A-frame will be designed with a thatched roof, and will be consistant with the property’s main, historic A-frame structure, but due to historic designation requirements, could also be built with a flat roof if necessary.

“There are thousands of beautiful historic properties all over the world that are sitting vacant without their proper use, said Bill Fuller, managing partner of Miami’s Barlington Group, which will be operating the property and is known for its preservation of the historic Ball and Chain bar in Little Havana “This is just an amazing example of a historic property that is sustainable.” As for the reopening schedule, “We anticipate reopening in the fall of this coming year,” said Fuller.

Somebody’s Funky Tropical Fantasy, With Flexible Coral in the Pool, Lists for $3.85M

101-Year-Old Coral Rock Cottage in the Heart of the Grove Likely Has a Very Motivated Seller, and a $2.15M Price Tag