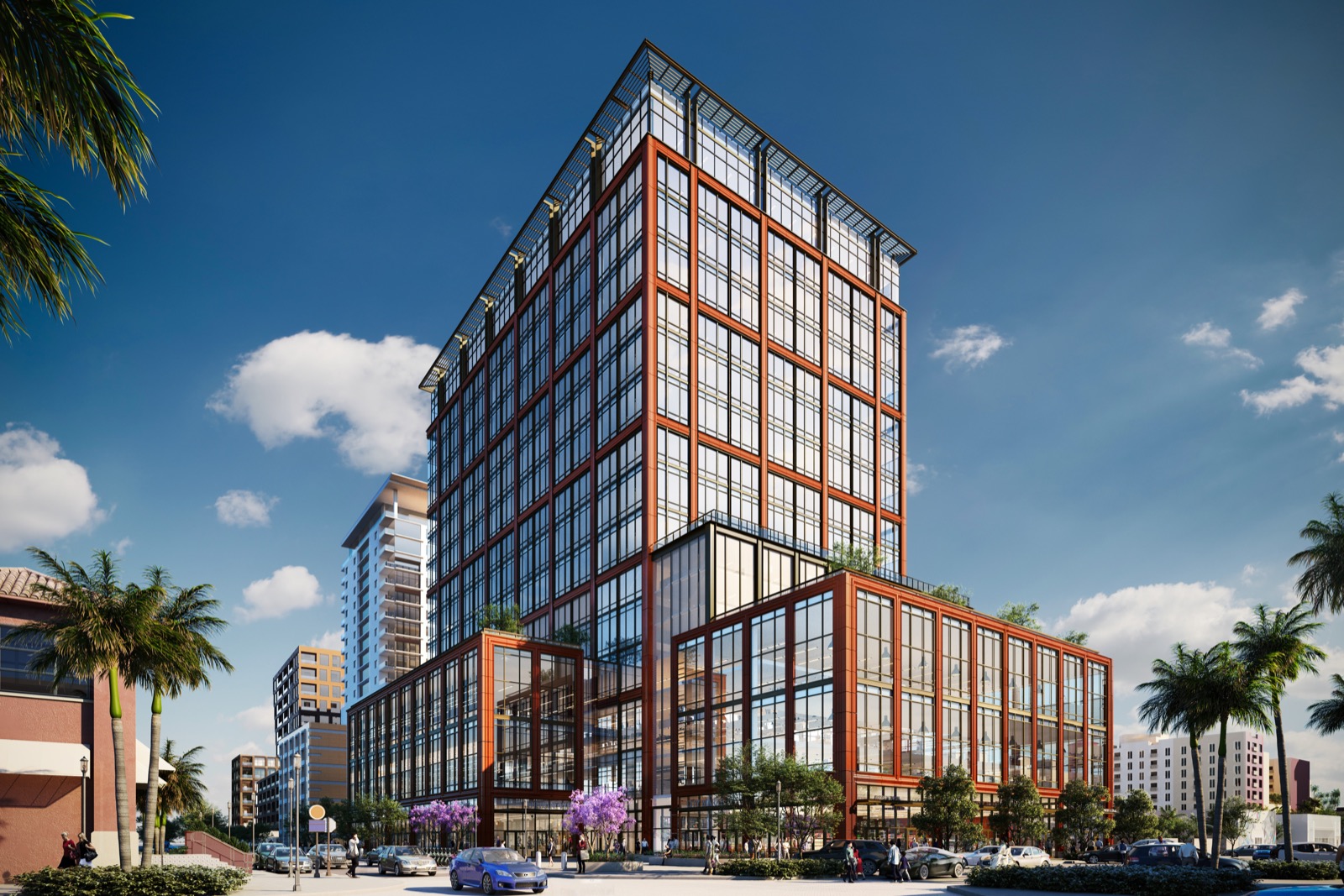 The Related Companies, the New York-based developer of the massive Hudson Yards in New York, and sister company to the Related Group, that Miami-based megadeveloper, is bringing a few substantial new projects to Downtown West Palm Beach. On May 16th the Related Companies broke ground on 360 Rosemary, an upscale office building adjacent to the Virgin train station, and concurrently to that they announced 575 Rosemary, a mixed use tower, and One Flagler, another office building, heading for the area.

360 and 575 Rosemary are designed by Elkus Manfredi Architects and Leo A. Daly, and One Flagler by David Childs. All three of these towering new edifices to New York money will be clustered around Rosemary Square, which is a revamp of CityPlace, West Palm Beach’s New Urbanist mixed use project/mall/Truman Show-esque urban core, which Related built twenty years ago.

Check out the renderings, below, and the rather lengthy press release put out by Related, after that. The last two images are of the redone Rosemary Avenue, a part of Rosemary Square, and the new fountain coming to the center of Rosemary Square, called “Water Pavilion West Palm.” by Danish artist Jeppe Hein.

“Related is committed to the economic resurgence of Downtown West Palm Beach led by exceptional spaces designed for the increasingly interconnected way people live and work today,” said Gopal Rajegowda, Senior Vice President of Related Companies. “Those who work at 360 Rosemary will have exceptional access and proximity to the suite of culinary, wellness, cultural, retail and transportation amenities in the neighborhood making it an ideal venue to foster great company culture, build new relationships and attract great talent.”
Business Development Board of Palm Beach County President & CEO Kelly Smallridge said, “Over the past 5 years, we have seen a tremendous amount of interest from firms who are looking to move their operations to West Palm Beach, specifically from Manhattan, Boston and Connecticut. Since the opening of CityPlace Tower 10 years ago, West Palm Beach has had the opportunity to increase its state-of-the-art, Class-A office space and 360 Rosemary fill that void, helping the city attract business leaders across all industries. Employers are always looking for locations that offer recreation, dining, entertainment and culture, and 360 Rosemary, with its proximity to Rosemary Square, offers just that.”

The Rosemary Square neighborhood, which is currently undergoing a $550 million transformation from a retail and entertainment center to a vibrant community and destination, features premiere commercial office space including 360 Rosemary; rejuvinated green spaces; modern residences; diverse, experiential retail and culinary offerings; robust arts and cultural programing—culminating in an exceptional new district to live, work and visit in South Florida.

Related Companies is the visionary firm behind some of the world’s most impactful mixed-use urban neighborhood developments and, in the past few years alone, has created more than eight million square feet of office space for dozens of diverse business leaders across all industries including WarnerMedia, SAP, Sidewalk Labs, Wells Fargo, KKR, Google, Facebook, Converse and Tapestry. In West Palm Beach, Related has demonstrated a deep understanding of workplace needs with its widely acclaimed CityPlace Tower and a legacy in neighborhood placemaking with the conception of the original CityPlace, now known as Rosemary Square.

Related also unveiled plans for 575 Rosemary, an upcoming mixed-use development, and One Flagler, a Class-A office tower that will anchor Okeechobee Business District and the Flagler Financial District.

“Today we have one of the world’s most experienced developers continuing their tradition of best-in class-development right here in West Palm Beach. For over 20 years, Related has been a strong partner of the city with a long term commitment to our community. These three new projects will provide the much needed Class-A office space and desired residential offerings that provide significant long-term opportunities for economic growth and success.  This continued investment into our city is a testament to the bright and vibrant future ahead for West Palm Beach,” said City of West Palm Beach Mayor Keith James.

Located at the northeast corner of Rosemary Square, 575 Rosemary is a 21-story mixed-use tower designed by Elkus Manfredi Architects and Leo A. Daly. It will include 325 state-of-the-art luxury residences, with 15% of units dedicated to workforce housing, and offers residents unrivaled access to the best in local arts & culture, wellness, entertainment and shopping in the heart of Downtown West Palm Beach. Residents will have access to many exclusive amentities such as a state-of-the-art fitness center, outdoor deck and pool, and lush rooftop gardens. The building will also include approximately 95,000 square feet of commercial office and retail space at the base. 575 Rosemary is expected to be complete in late 2021.

Designed by world-renowned architect David Childs, One Flagler is a 25-story Class-A office building that will anchor West Palm Beach’s Okeechobee Business District and the Flagler Financial District. It will include 270,000 square feet of flexible office space, 4,100 square feet of retail space, a restaurant, and a reading room open to both the public and members of the adjacent First Church of Christ, Scientist. The church, designed by architect Julian Abele in 1928, is considered one of the most architecturally significant buildings in all of Palm Beach County and would be preserved in perpetuity by One Flagler. The project will also feature a living green wall adorning its parking garage and include 1.25 acres of green space extending the waterfront greenbelt. The building is expected to be complete in late 2023.

The Big Bubble Takes a Ride on The Brightline

More ‘Studies’ Bring Up Dirt on Hialeah; Beckham’s Stadium Set for a Vote