The History of Miami’s Margaret Pace Park, and the Interesting Buildings That Surround It 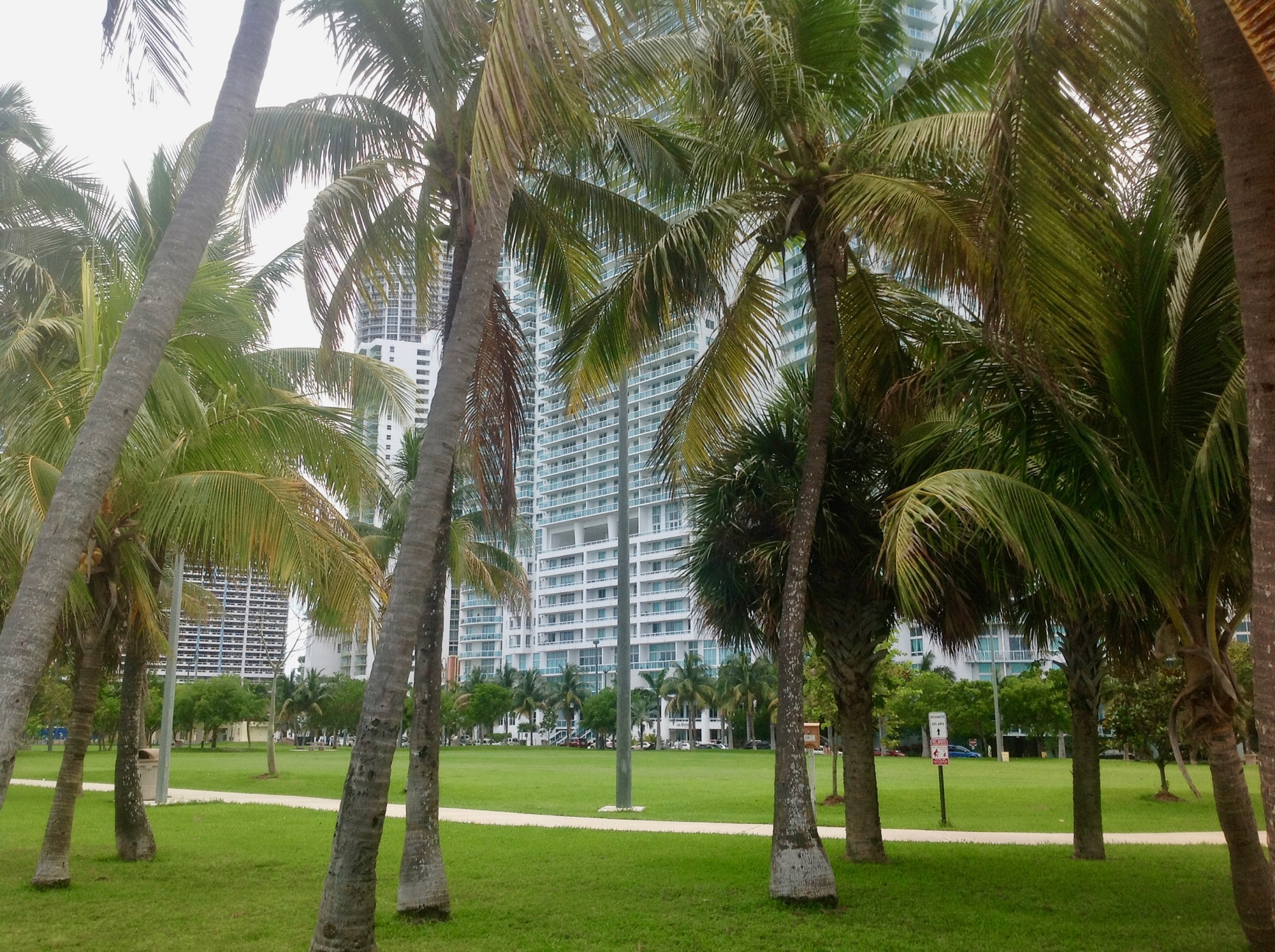 One of Miami’s liveliest public spaces is Margaret Pace Park, at the south end of Edgewater, one of the city’s most rapidly transforming neighborhoods. Lined with towering residential towers on the west, and the shimmering blue waters of Biscayne Bay on the east, the park is a favorite of neighborhood residents. The park features basketball, tennis, a large playground, volleyball, sweeping lawns, public art, and a meandering baywalk with spectacular views of the bay.

Once a single family residential area, and a subdivision called ‘Miramar,’ the park and its vicinity have evolved into the heart of Edgewater. Many of the buildings surrounding the park also have their own stories to tell. Here they are:

Margaret Pace Park is one of Miami’s great urban parks. It was created in the late 1960s and named in honor of Margaret Pace, who was a founder and past president of the Miami Garden Club. Pace was also chairwoman of Royal Palm State Park, which later became part of Everglades National Park, according to the Biscayne Times. A former vice president the Miami Women’s Club, which is located next door, Pace fought development of the adjoining bayfront green space which became the park, and was named in her honor, according to the Miami Herald. The park was created in the late 1960s, and for a while was notoriously overrun by drug dealers and hookers before it underwent a $4 million makeover in 2003. 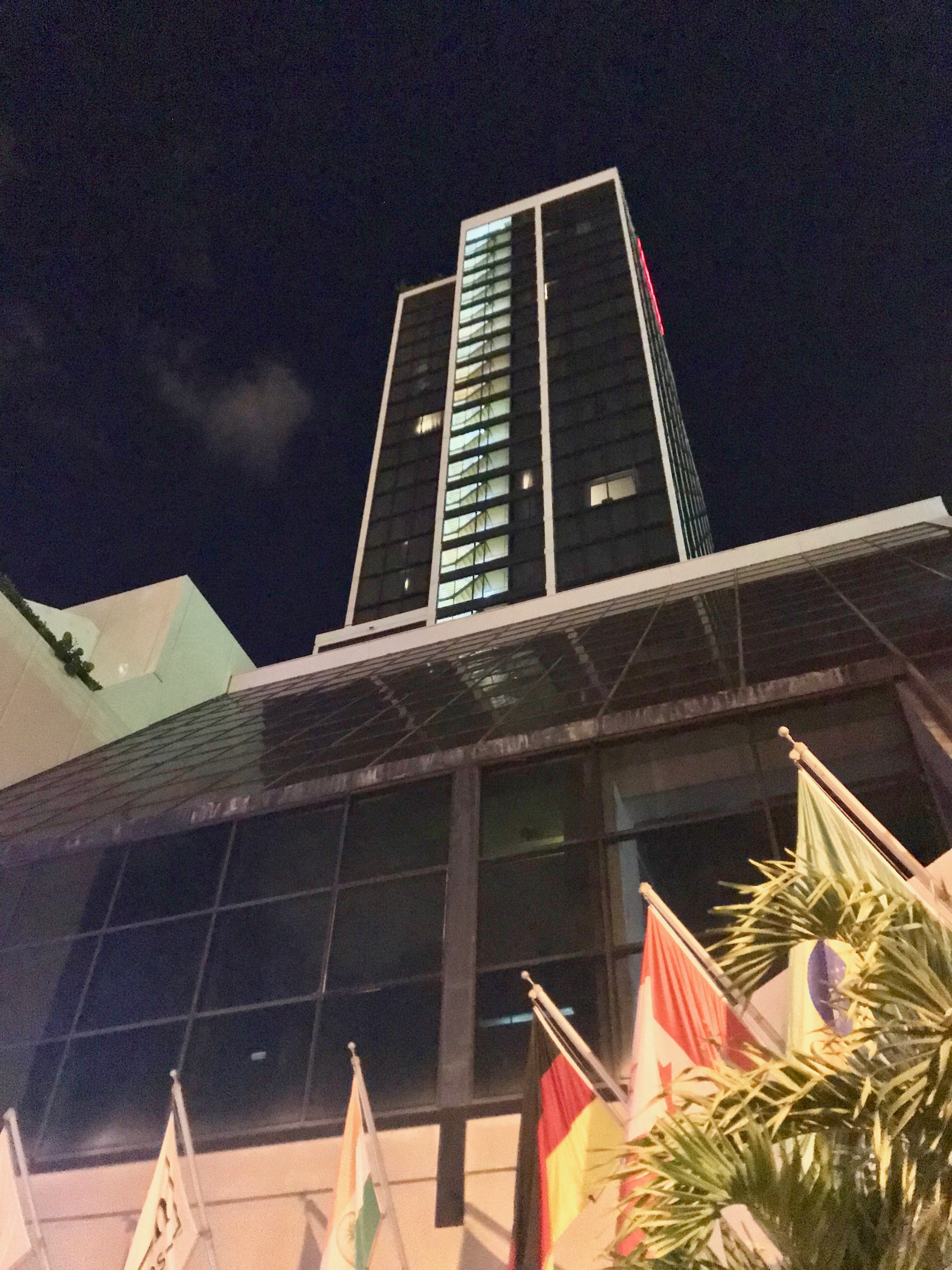 In the late 1960s, developer Tibor Hollo conceived a megaproject of residential and hotel towers, with shopping centers and entertainment venues connecting them, spanning multiple blocks from Biscayne Boulevard to Biscayne Bay. Called ‘Plaza Venetia’ (a name that only lives on in one of the condo buildings, the Venetia) the complex was designed in the ‘urban renewal’ mode popular at the time, that led to the leveling of blocks of urban cityscape for the creation of superblocks that were often isolated from the outside. Car-oriented, although high-density, the complex presented bleak concrete walls to the street that are hostile to pedestrians.

Along the bay, the Doubletree Grand hotel and condominium tower, the Marriott, and the Venetia are all part of the complex. They line a public baywalk and face a large marina. The project’s centerpiece, however, was the Omni International Mall, which began life as a swanky shopping destination. Opening in 1977, it was Miami’s first urban mall, and contained amenities like a multiplex movie theater, a huge carousel in a grand atrium in the sky, and a luxury hotel on top.

The Omni was built around the old Jordan Marsh department store, itself a remnant of a formerly-vibrant retail corridor on Biscayne Boulevard. The great promise of the Omni Mall was to bring that corridor back to life, and reinvigorate Downtown Miami. Less than fifteen years later the mall was on life support, and by 2000 it was shuttered.

Portions of the former Omni are currently leased out to the Miami International University of Art and Design, and the US Passport Office, the hotel is still in operation (it’s now a Hilton), and its vast ballroom is still used for events, but most of the building remains empty. It is part of a plan by Malaysian casino giant Genting to create a gigantic resort and casino property, however since Genting has had significant problems getting gambling legalized on the site the whole property remains in limbo. 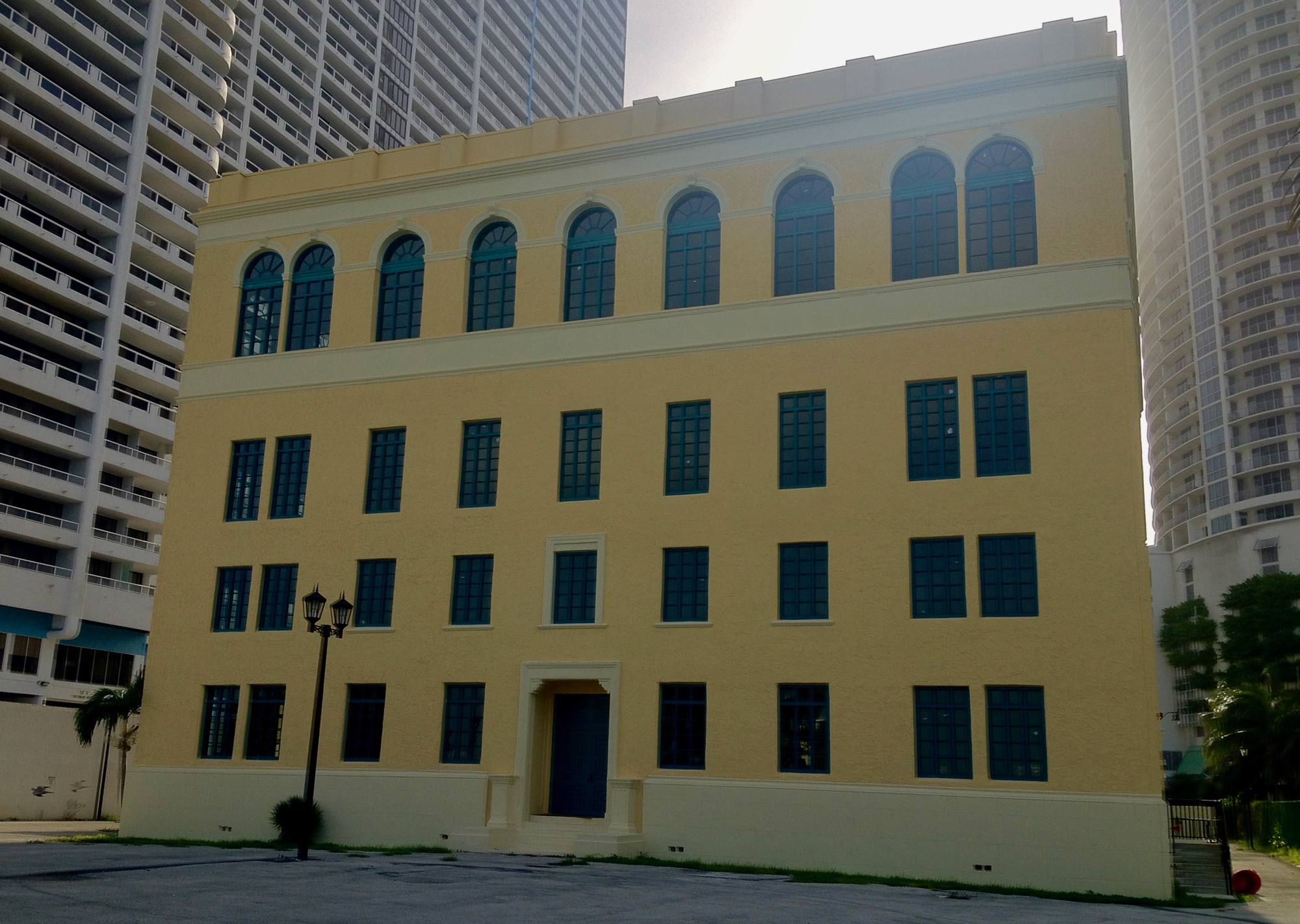 The Miami Women’s Club was formed in 1900 as the Married Ladies’ Afternoon Club, but it didn’t move to its current location at 17th Street and Bayshore Drive until 1930, when the club moved into a brand new building designed by architect August Geiger. The women’s club was instrumental in establishing public libraries in Miami, so naturally the new building contained one, in addition to a ballroom and other amenities.

The four story Mediterranean Revival building wraps around a garden courtyard and contains large, stately rooms on multiple levels. The facade originally contained elaborate architectural moldings which were removed in the 1950s due to deterioration. Many of the interiors also deteriorated significantly over the years.

A few years ago the club announced a 90-year lease with the Heafey Group to bring an upscale restaurant, lounge, and rooftop deck to the property, alongside restoring the historic building to its original architectural luster.

The 1800 Club and the Margaret Pace Park ‘Wall’

One of Miami’s most interesting watering holes used to face Margaret Pace Park at 1800 Bayshore Drive. Opened in 1955 by developer Bill Ader, on the first floor of one of his apartment buildings, the 1800 Club was a landmark. As the New Times described it upon the bar’s closing, “[Ader’s] crowning achievement was a diminutive cave of a bar called the 1800 Club, which remained for decades the shadowy haven of the city’s brackish pool of politicians, journalists, businessmen, and judges. And the cheating hearts among them all.” The barmaids wore suitably skimpy attire. First it was tight white tops and gold lamé pants, and then various getups as the fashions changed.

The club finally closed in 2005 to be replaced by a condo tower of the same name, built by developer Michael Baumann of Miami Circle notoriety. Now the 1800 Club, a looming but entirely inconsequential condo tower, not much different to dozens upon dozens of the others in the city, stands in line with all the other equally tall residential towers lining Margaret Pace Park. 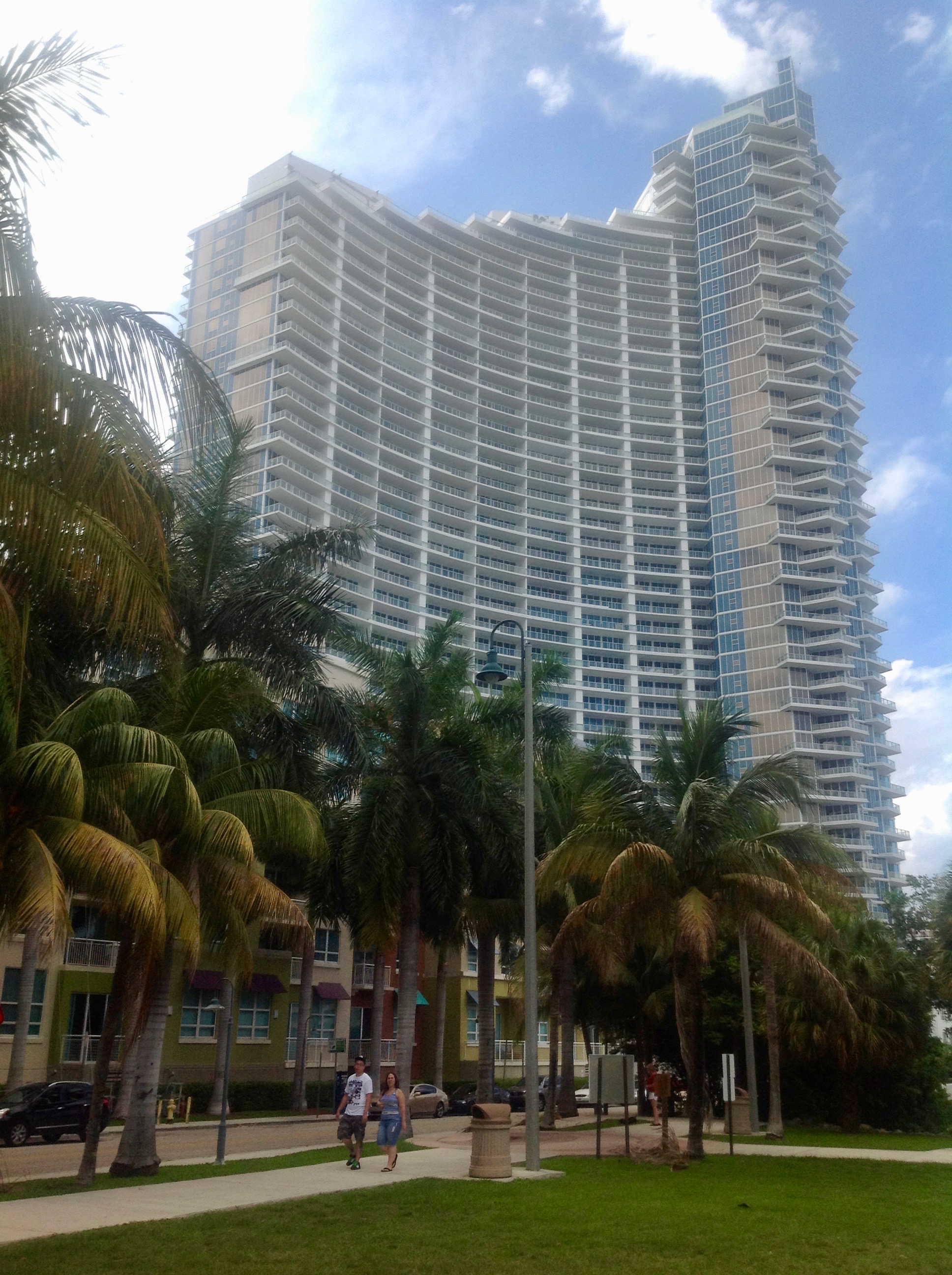 Spanning the width of a full city block, Paramount Bay is a residential tower that bends in a quarter circle thrusting out to the bay. It originally curved around a historic, Mediterranean Revival house famous for being in the movie ‘There’s Something About Mary.’ The exterior scenes in the movie, shot on Bayshore Drive, show just how much the neighborhood has changed, from a low-scale enclave of single-family homes to one of towering residential palisades.

During construction of Paramount Bay, a crane fell on the house, significantly damaging it and killing two construction workers. The rest of the house was demolished and a new low-rise building, with a rooftop pool for residents and skybridge connecting it to the tower, was built in its place. Ironically, at the time of the accident, the ‘Mary’ house was being used as the project’s safety office.