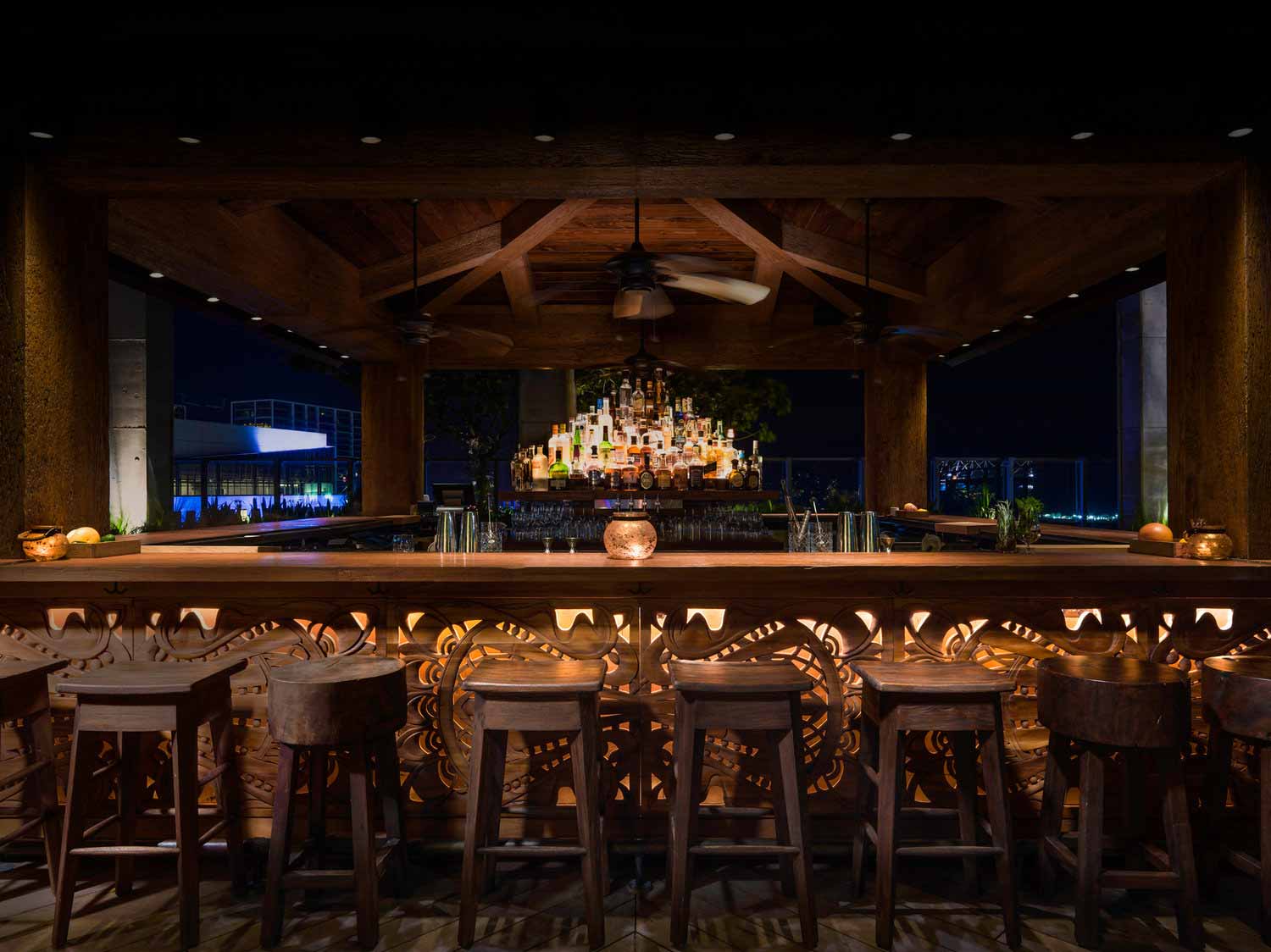 When you’re in the mood for an exciting nightcap, a dinner with a view, or a party in the clouds, try out one of these urban hotspots in Miami. These are Miami’s ten most spectacular rooftop bars, restaurants, and lounges. 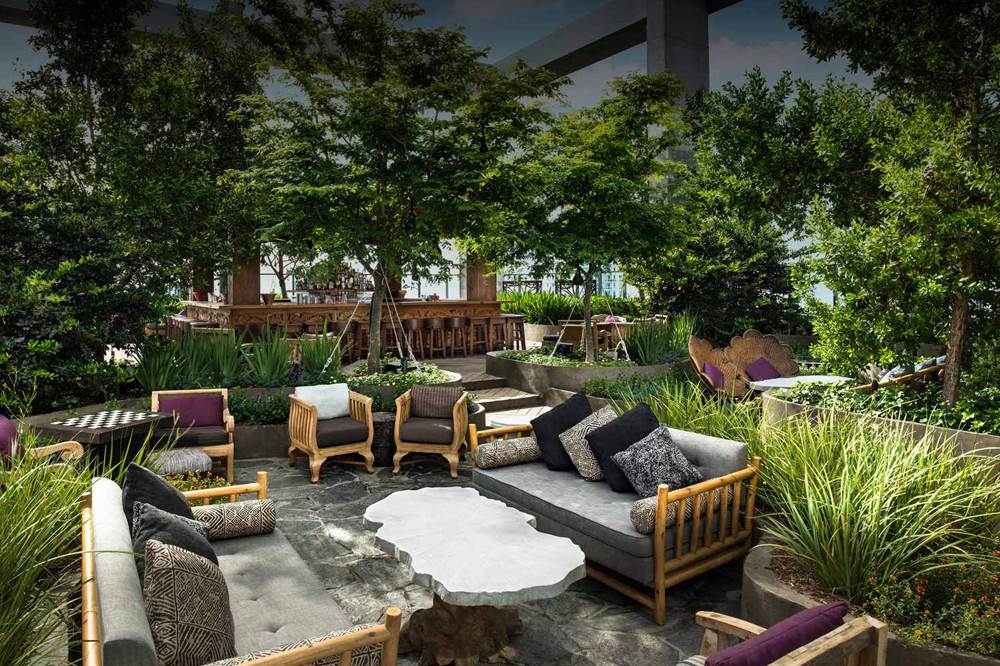 Sugar, at the East Hotel

An outdoor bar nestled in an actual forest atop the East Hotel in Brickell, 40 floors above the street, Sugar is unquestionably the most beautiful of Miami’s rooftop spaces. Inspired by the hotel’s Chinese and Hong Kong roots, Sugar serves drinks and small plates influenced by Asian and other cultural traditions. Music by local and international DJs adds to the vibe. Intimate dining areas are nestled among the lush foliage, and the views of the Miami skyline are spectacular. 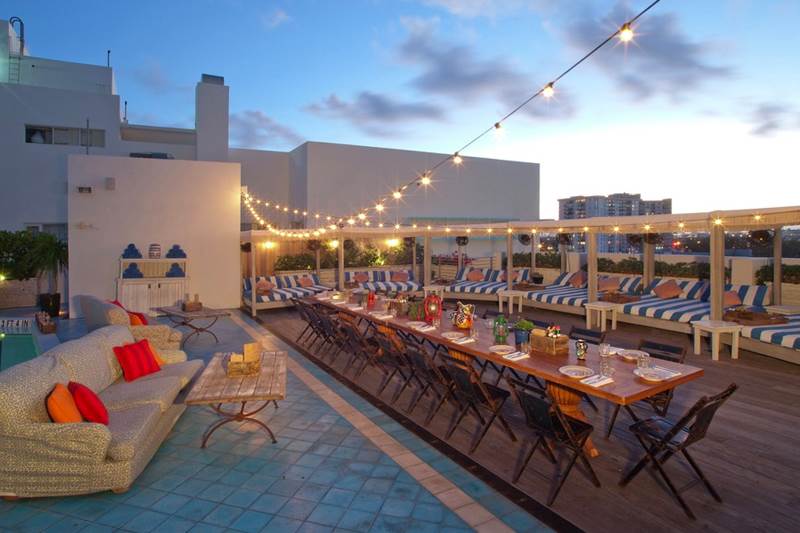 The 8th floor rooftop bar and taqueria at the exclusive Soho Beach House in Miami Beach serves spicy margaritas and small menu items. A plunge pool, comfy couches, and large daybeds provide the perfect atmosphere to chill out and soak in great views of the ocean, cityscape, and the main pool below. You’ve got to be a member or a friend of a member to get in though. Ocho is located in the the members only section of Soho. 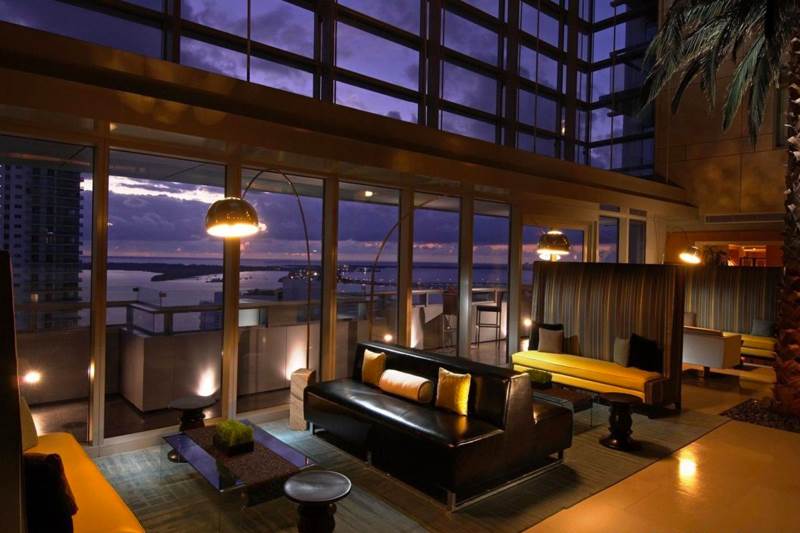 The Bar at Level 25, at the Conrad

Located on the 25th floor of Brickell’s Conrad Hotel, the bar at Level 25 is not technically rooftop but it sure does feel like it. The space is at the bottom of the hotel’s soaring atrium, with spectacular views over Brickell and Biscayne Bay. The menu offers 50 wines by the glass, and a selection of creative small plates. 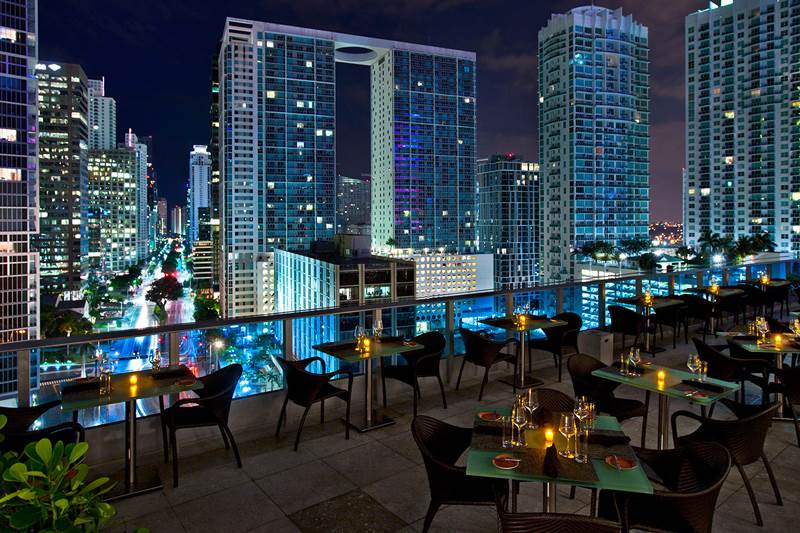 With incredible views of the Miami River, Biscayne Bay and Brickell, this outdoor rooftop bar at the Epic is an exciting place for happy hour drinks in the heart of downtown Miami. Area 31 was named after Fishing Area 31, an international zone designated by the United Nations Food and Agriculture Organization as a sustainable fishery, a vision that Area 31 embraces and advances.

Area 31’s menu is seafood-centered, with global flavors and an ethical ethos. The lounge even has a sustainability certification from the Monterey Bay Aquarium’s Seafood Watch. Unique seasonal cocktails are created by the staff, and incorporate ingredients from the on-site herb garden. The bar also serves a wide selection of international wines and interesting craft brews. 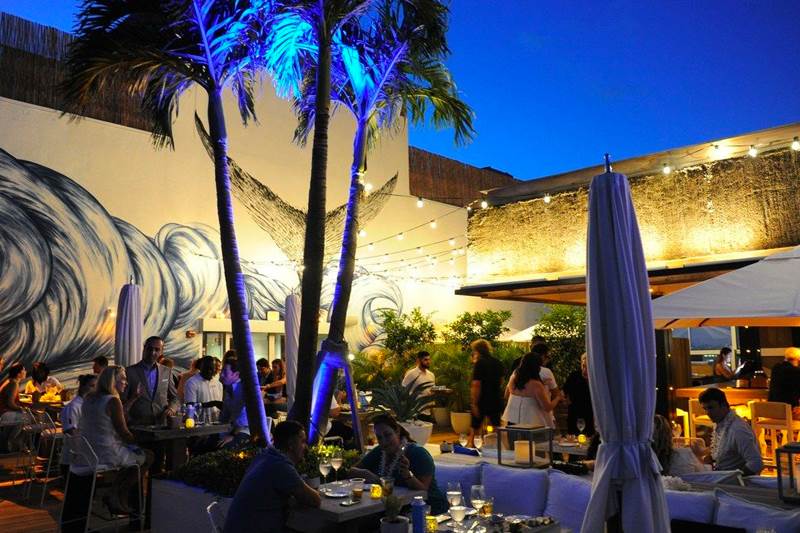 Watr, at the 1 Hotel

Atop the 1 Hotel South Beach, Watr is an outdoor bar, restaurant, and pool serving Peruvian influenced Japanese cuisine. A wide seafood selection is prepared using techniques and flavor profiles inspired by both South American and Asian cuisine. Distinctive features include a large swimming pool, cabanas, and outdoor bathrooms. Open only to hotel guests until seven pm and the public after, the space has spectacular views of the ocean and the Miami Beach skyline. 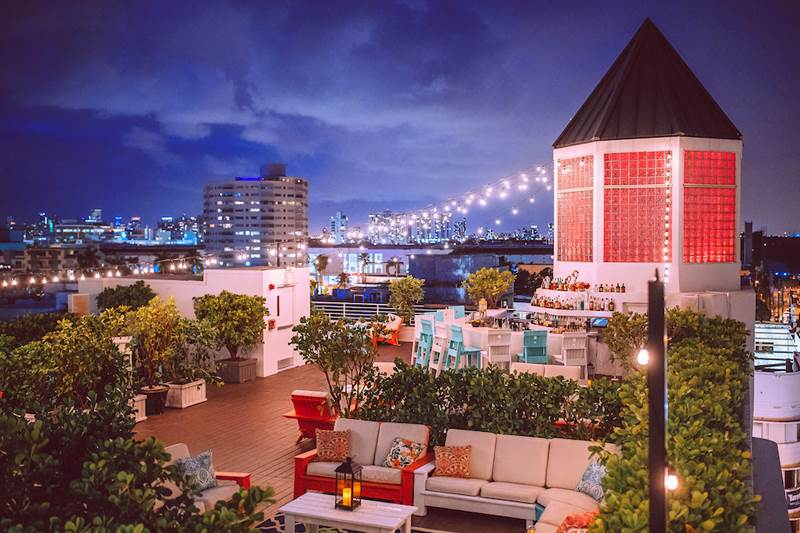 The Cape, at the Townhouse Hotel

Located in the heart of South Beach, the Cape is a bohemian bar on the roof of the Townhouse Hotel, overlooking Collins Avenue. Themed as an homage to Key Biscayne’s Cape Florida lighthouse, the centerpiece of the design is an art deco lighthouse. The Cape eschews the typical bottle service and velvet ropes of many of its neighboring venues for a relaxed vibe, with intelligent cocktails and craft beers. Weekly entertainment includes a varied selection of live, eclectic and surprise performances. 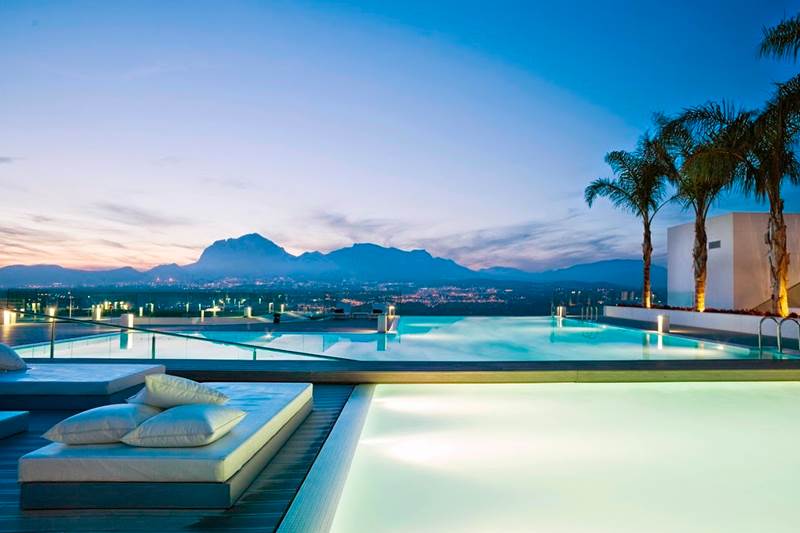 Highbar, at the Dream Hotel 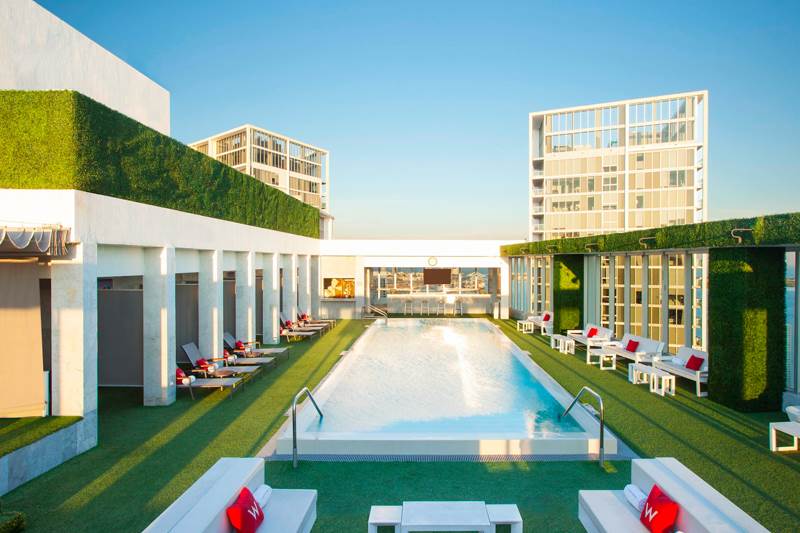 WET Deck, at the W Miami

Formerly Club 50, this space became WET Deck when the Viceroy Miami was converted into the W Miami. 50 stories up, the indoor-outdoor space includes a large rooftop pool, bars inside and outside, daybeds and lots of places to lounge, as well as tropical cocktails and light bites. The views of Brickell, downtown Miami and the waterfront are so good that the space won the Miami New Times’ award for Best Views in the Best of Miami 2018. 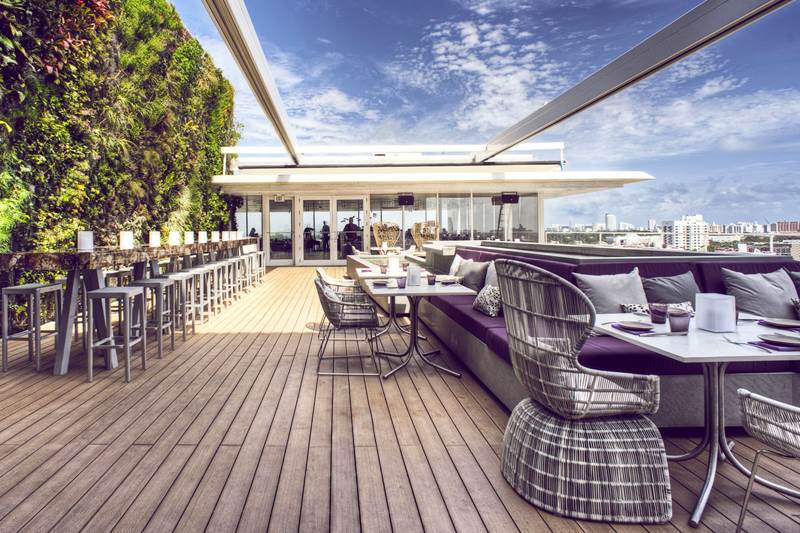 The most architecturally stunning rooftop bar on the beach, Juvia is located atop the iconic 1111 Lincoln Road, by starchitects Herzog & de Meuron. The outdoor dining area features a retractable roof and a vertical garden. Inside, the main dining room is wrapped in glass walls, offering a panoramic view of the South Beach cityscape. The food is a fusion of French, Japanese, and Peruvian-inspired cuisine, including crudos, tiraditos, ceviches, and nigiri-style plates. 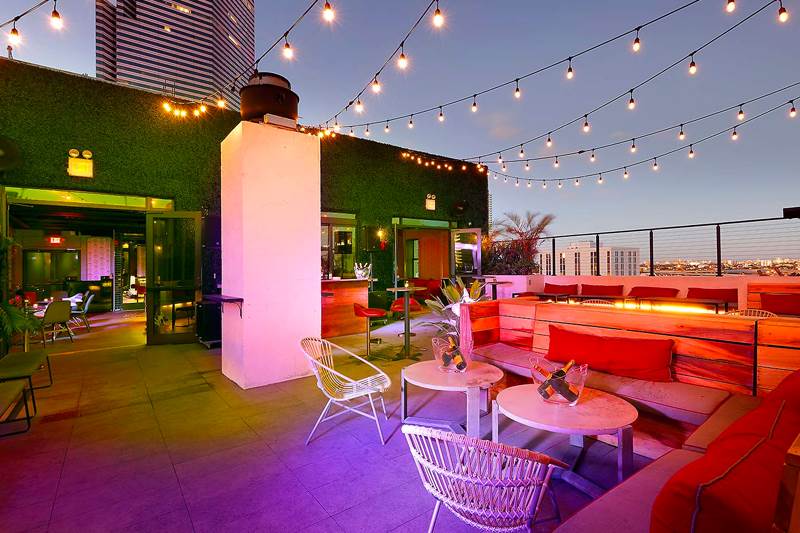 Bloom Skybar, at the Langford Hotel

Bloom Skybar is located at the top of the Langford Hotel, in the heart of Downtown Miami. Previously called Pawnbroker, before Langford was taken over by Eurostar Hotels, Bloom Skybar hasn’t actually changed all that much despite the name. Although the Langford is an extensively renovated historic bank building in the beaux arts architectural style, Bloom’s aesthetic is kind of a mashup between steampunk and midcentury modern. Nestled among the towers of Downtown Miami, the indoor-outdoor bar has views of the cityscape in three directions. It’s great for after work cocktails.