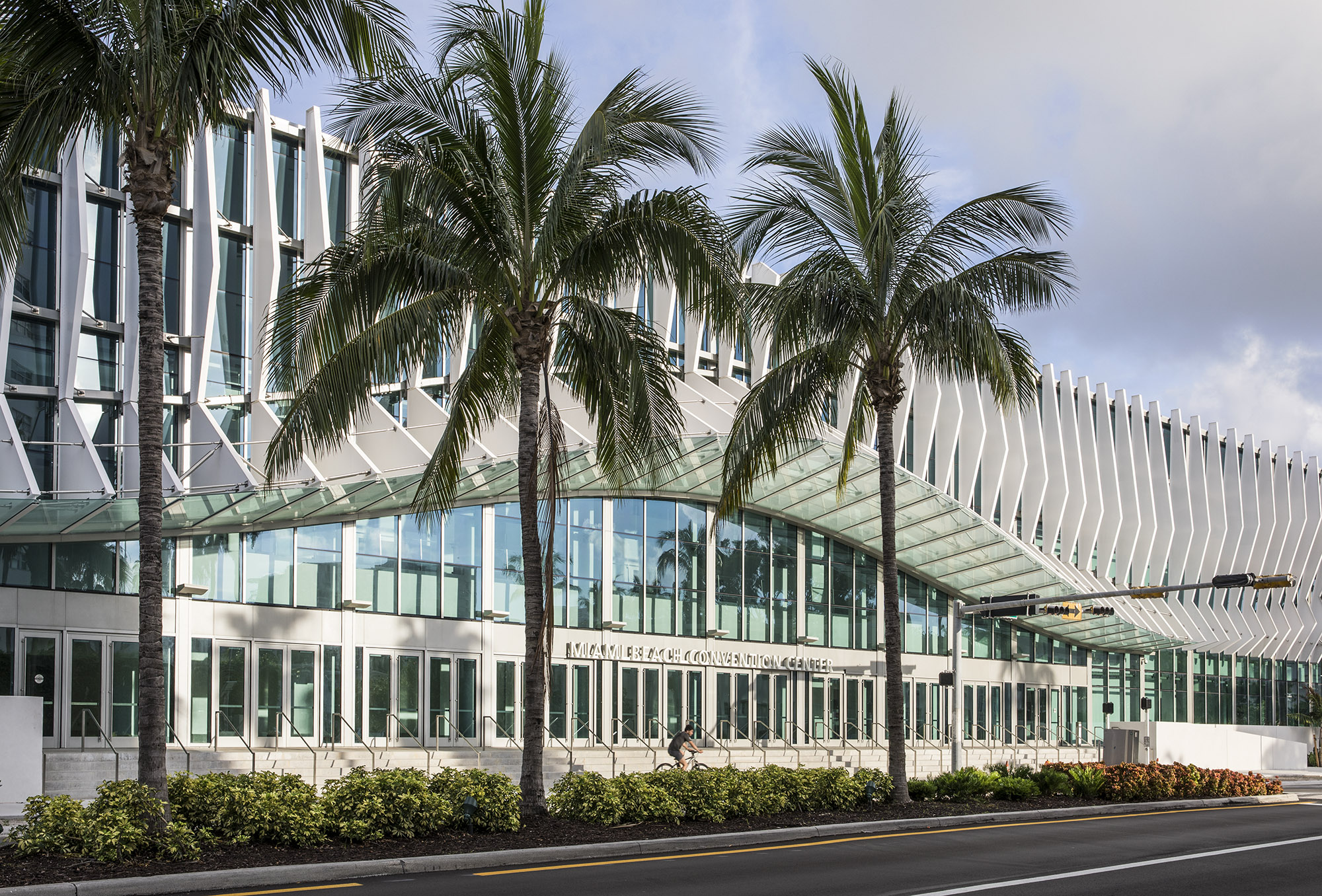 The Miami Beach Convention Center renovation, designed by Fentress Architects (lead architect), Arquitectonica (facade and associate architect), and West 8 (landscape architect) is finally nearing completion, in time for Art Basel Miami Beach this year. The architects released photographs of the completed portions of the transformed convention center, giving an inside and outside hint at what to expect. Elements like the rooftop ballroom, the West 8-designed park, and the grand west lobby are still in the works.

The accompanying press release has lots of interesting details about the project:

In 2016, the City of Miami Beach selected Fentress Architects to serve as the lead architect for the 1.435 million square foot redesign, incorporating a 500,000 square foot exhibit hall, four new ballrooms ranging from 10,000 to 60,000 square feet, and 127,000 square feet of new meeting spaces. The shared vision between the client and design team was to reposition the MBCC as the most technologically advanced convention center in the U.S. and raise the facility to comply with FEMA code as part of a resiliency plan to safeguard against future hurricanes and flooding. Throughout the nearly three years of construction, MBCC has remained operational with over 40 shows and hundreds of thousands of visitors.

Following the redesign, Miami Beach Convention Center and its surroundings will live up to the world-class destination the hotspot has become known for through annual events such as Art Basel, as well as creating a healthy, resilient amenity for the mostly residential neighborhood. Twelve acres of green space and 1,287 trees are being added, with the pervious acreage of the 25-acre campus being increased by 245%. The natural shoreline of the Collins Canal will be restored by planting over 570 new Mangroves and adding a multitude of other trees, including 410 Veitchias and 10 Everglades Palms. Over six acres of parking lot are being transformed into a public park, including a tropical garden, game lawn, shaded areas, veterans’ plaza, and public art. In total, $7 million is being allocated to Art in Public Spaces, representing the largest response to a call to artists in the history of Miami- Dade County, and an important aspect of integrating culture into the everyday lives of the community.

To overhaul the MBCC’s existing architecture, Fentress Architects and Arquitectonica collaborated on a context-driven design that incorporates the structures of ‘natural elements of the ocean, beach, and underwater life’ such as waves, manta rays, and coral reefs. The exterior envelope is designed with more than 500 “fins,” angled aluminum linear forms that create a curvilinear undulation inspired by the nearby ocean waves. The fins create a highly efficient curtain wall screen that responds to the solar orientation of each façade maximizing shading from the intense tropical sun of Southern Florida while providing a dynamic movement to the facade. Fentress developed a custom parametric software to automate the design and production of the fins for the unique exterior skin, in turn creating an efficient information and technical exchange with the fabricator. Additionally, the façade features hurricane-resistant connections and projectile resistant glazing.

The colors and patterns of the interior design finishes emulate receding water, sea foam, and varying types of local coral. Within this environment the MBCC visitors and staff alike will experience digital displays incorporating event specific branding, art and dynamic visual elements. All building systems have been raised to the second floor levels. Some of the technological features include state-of-the-art low voltage electronic systems, a Distributed Antenna System for cell phones; expanded Wi-Fi throughout the entire facility; digital read boards for meeting rooms, ballrooms, and exhibit halls; and new digital exterior signage, positioning the Miami Beach Convention Center as a high-tech showcase.