‘Florida Architecture’ Praised the Office in the Grove When it Was Brand New.

OFFICE IN THE GROVE

A building that is integrated with landscape and art: an office structure that is completely humanized, and architectural design which was dictated by the unusual site and the desire to give maximum views of the tropical environment: That is Office in the Grove. The building concept developed by Kenneth Treister, FAIA in 1970, offers a contemporary structure delightfully in scale with its environment and the people who make use of its facilities on a daily basis. Integrating art, architecture and landscape into a harmonious whole is an achievement, which will distinguish the building as a landmark for future generations to enjoy.

The location on South Bayshore Drive in Coconut Grove, overlooking Miami’s Dinner Key Marina and sailboat anchorage determined the total feeling and character of the building. Its pentagonal shape, on a triangular site, provides office views of the park, Biscayne Bay and the hundreds of picturesque sailboats at anchor.

The eight-story structure has a giant wedge, which seems to be cut out from the whole. This wedge is a key ingredient in the design, distinguishing as it does, the main entrance to the building. It serves also to enclose a dramatic shaft of vertical space, which may be seen upon entering the lobby. From a practical standpoint, the wedge circulates fresh air to the smoke-proof fire tower, allowing for the circular core design. The entire facade is composed of tinted glass windows to offer maximum views. Each window in recessed into pre-cast concrete panels, which serve to shade the glass, protecting the glass in case of storm. Artistically, it creates deep shadows on the façade, which give interest and movement as the sun travels its course.

The South Bayshore Drive entrance is prominent to behold and has immediate identification. This was accomplishes through the use of a canopy of steel and glass, serving both as a sculptural accent and as a cover for cars to disembark passengers. In his effort to humanize the Office in the Grove, the architect-artist has eliminated the automobile from pedestrian view. This allows the environment to become in scale with man and his place, instead of the car and its pace.

The solution was to avoid building a huge parking structure. Instead, automobiles were submerged in parking areas beneath the structure, hidden in a large pedestal base upon which the superstructure rests. There are three levels of parking, each approached by a different entry and level, taking advantage of the extreme differentials in levels of the site and adjacent streets, Bayshore Drive and 27th Avenue. The tri-level base is: a basement level, a second level concealed by a grass berm exterior and the third level under the main structure, hidden by a continuous fern planter wall which caps the grass berm. The berm not only gives the building a base, but also provides a low, natural and green silhouette to the passing pedestrian or motorist. The superstructure with it eight floors of shaped office space surrounding the central core, gives the building great efficiency with a minimum of interior hall spaces. 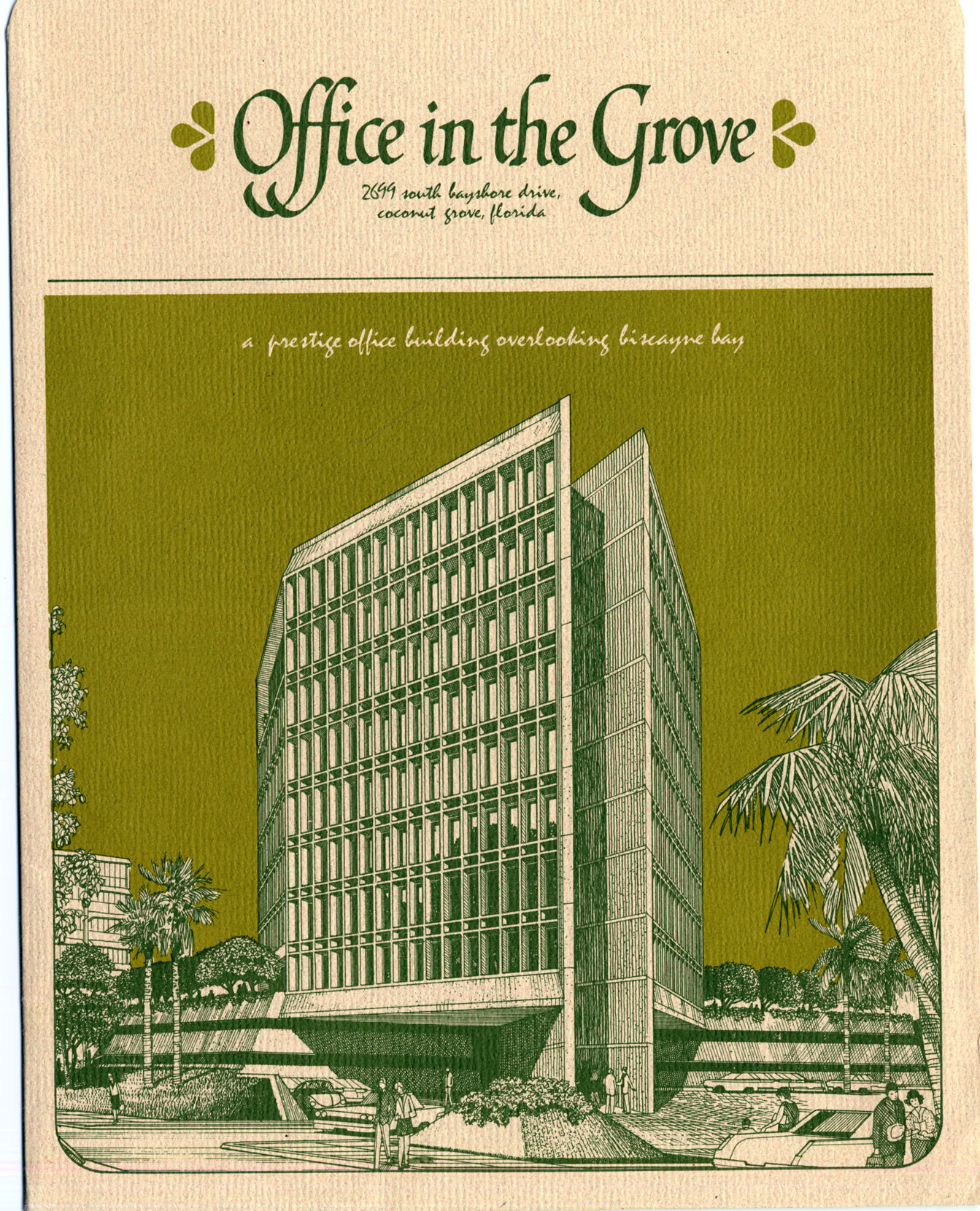 The lobby is deliberately small and in human scale to accommodate pedestrians who enter in small numbers. It is two stories high, exposing a balcony, with integrated art, both on the exterior and the interior. The theme of the art in various media is the lush tropical vegetation of southern Florida.

The art takes many forms: pre-cast concrete sculpture, bronze sculpture and Honduras mahogany carvings. The exterior exposed concrete façade features tropical fauna and flora, utilizing the sun as a changing tool to give movement and interest to the designs. The theme is repeated in the lobby and on each floor, giving visual and aesthetic identity to the individual floor and for its occupants and visitors.

Each sculpture is an original work of art and cannot be repeated because the molds are lost with each pouring. The architectural buff will further note on close inspection, that the exposed concrete of the exterior has broken fines, which also catch the sun as it moves.

The bronze sculptures of Office in the Grove appear first in the large sculpture of birds nesting on a fountain at the main entrance. The bronze sculptured doors of the elevators, the chandeliers on the lobby and the bronze bas-relief over the entry door are fine examples of this medium. The Honduras mahogany carved entrance door reflects the architect’s love affair with art also. Again the carvings illustrate the tropical environment and are executed in each of the elevator cabs.

A 16-foot high mural in the lobby depicts a tropical landscape and curves with the wall, becoming an integral part of the architecture.

On each floor, al large photomural features a different scene of Coconut Grove, in sepia tones to blend with the beige and brown color theme of the building.

Landscaping is lush, of course, showing a maximum of greenery and therefore, humanizing the total structure. Planters have been placed at the parking level, the top 9th floor balcony and along the roof’s perimeter, crating a natural organic, living felling. Essence of the design is that art, landscape and architecture are inter-related with man and his environment.

One could only hope that more architectural concepts make art and landscape an integral part of the architecture serving man.